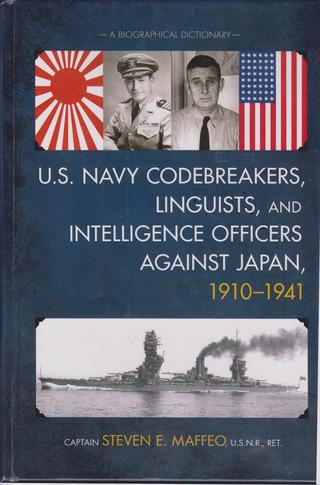 "A scholarly monument to the brilliant men and women who contributed mightily to the U.S. victory in World War II over Japan—and helped lay the foundations for today's National Security Agency."

—Stephen Coonts, New York Times best-selling author of Flight of the Intruder, Fortunes of War, and many others.

"Captain Maffeo has written a well-researched history of U.S. Navy cryptologic and intelligence development during the years 1910-1941. He explores this time frame with mini-biographies of 59 key people who contributed to this invaluable work. This small group struggled with some inept and self-centered senior leadership and small budgets to produce systems that were instrumental in the U.S. victory in World War II in the Pacific and laid the groundwork for the future. These key people could not have imagined what their original work has morphed into today; the Republic owes these pioneers a debt of gratitude .... Maffeo's book is a great contribution to naval history."
—Vice Adm. John M. Poindexter, USN, Ret., National Security Advisor to President Reagan
"Using oral histories, Navy records, and relevant secondary sources, [Maffeo] has assembled a bountiful cache of material about his subjects .... Maffeo's book fills a long-standing gap in the literature of Navy cryptology. This volume will remain the standard reference for information about the Navy's intelligence personnel before and during World War II."
—Elliot Carlson, author of Joe Rochefort's War: The Odyssey of the Codebreaker Who Outwitted Yamamoto at Midway, in the U.S. Naval Institute Proceedings

"...a significant contribution to American intelligence history....[this book] admirably fulfills the author's goal of humanizing these intelligence heroes and recounting their woes and triumphs before and during the Pacific War....this is an extremely valuable volume that belongs in general and research libraries alike....it will entertain and enlighten today's readers."

—Roger Dingman, author of Deciphering the Rising Sun: Navy and Marine Corps Codebreakers, Translators, and Interpreters in the Pacific War, in the Journal of Military History